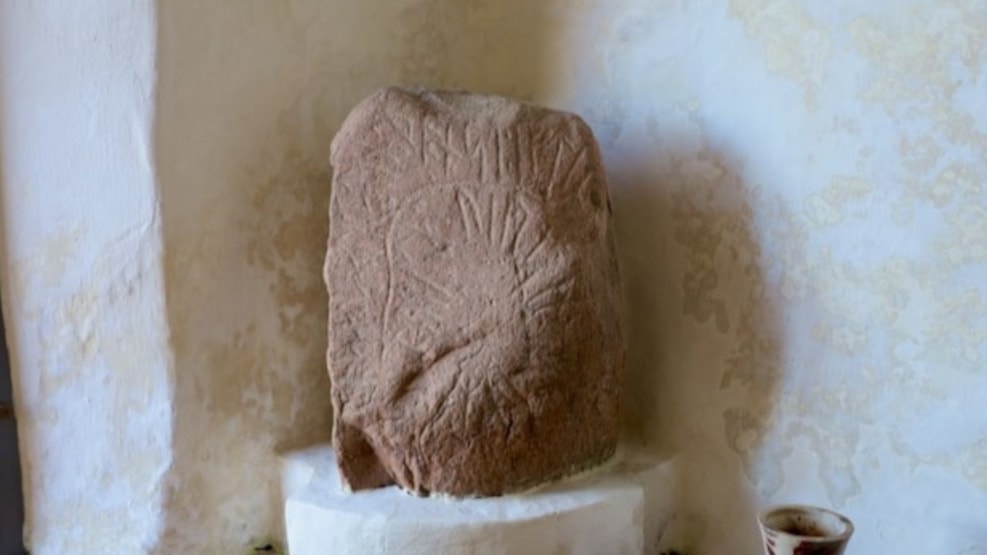 In Vang Church's porch you will find Denmark's smallest rune stone from the Viking Age.

The runestone stood in 1741 at the cemetery in Sjørring. Later it served as the cornerstone of a property and did not appear again until the 19th century. In 1841, the historically interested pastor Madelung from Vang found the rune stone at a farmer in Sjørring. He bought it for a speciedaler and took it home to Vang, where it has since stood in the church's porch.

The inscription has a slightly peculiar location. The first line begins at the bottom of the front and continues in an arc along the edge. The second line is similarly arranged within the first. Finally, the end of the inscription on the top of the stone is read. In modern language, the inscription reads:

"Åse erected this stone after Ømunde, her husband, who was Finulv's herdsman."

Being a herdsman means that you are part of a great man's armament. The inscription can thus substantiate that there may have been a royal court in Sjørring.

The Danes' first written language
The runes are the Danes' first written language. When Germanic peoples in the time around the birth of Christ came in connection with the Roman Empire, they created from the Latin letters their own runic alphabet of 24 letters. For unknown reasons, the alphabet was reshaped in the Nordic countries at the end of the eighth century. The number of runic characters was cut down to 16, which is called the futhark after the first 6 characters. The runes were used right up to the 12th century. Source: TOHMAS - Thys history online.

Read more about Vang Church and the aviator grave in the cemetery here.