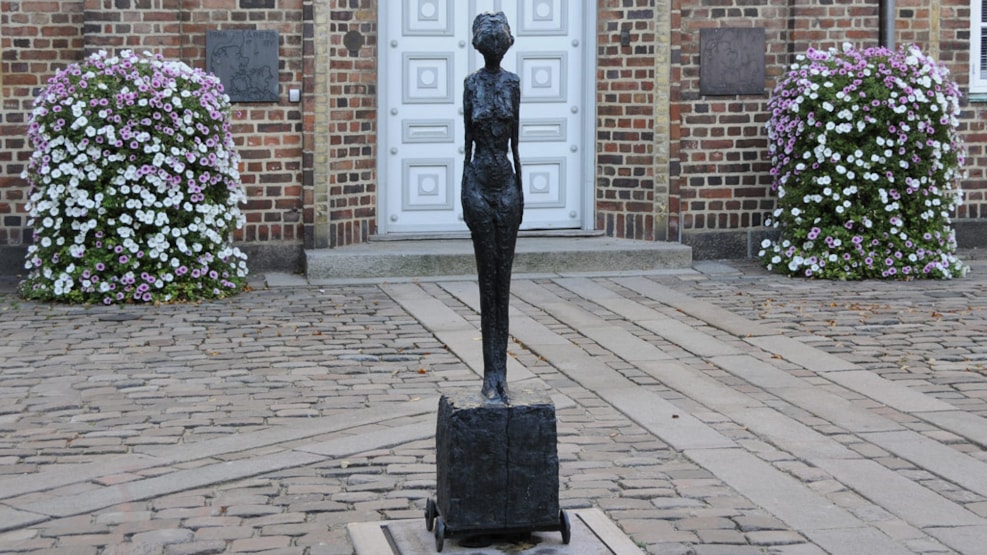 In front of the Old Town Hall in Holstebro, a woman on the Kærre figure, better known as 'Maren å æ woun' by Alberto Giacometti, used to stand, but she is unfortunately damaged.

She will return when the new elevator is installed.

The symbol of the culture revolution in Holstebro is this one: Woman on Cart in bronze by Alberto Giacometti. "The mayor and the municipal director spent 210,000 DKK on buying a small sculpture by a thin woman. It created a battle of war", says tourist guide Ruth Lovmand Rasmussen. So much money for such a wee one, was the reaction back in 1966, where food packages were put at the feet of Maren so she could gain a little weight. "Over time, the people of Holstebro have really taken to her and she is now the symbol of all the art we have," says Ruth Lovmand Rasmussen.

Woman on Cart is worth millions today. That is why she is lowered to the ground every night to sleep safely. She can be seen daily from 10 in the morning to 9 in the evening.

Join Ruth or one of the other tour guides on a free city walk to the art of Holstebro on Wednesday at 1 pm in July and August with start from Woman on Cart. The tour goes by The Citizens from Holstebro, Metal Boar and Monument of Fire.