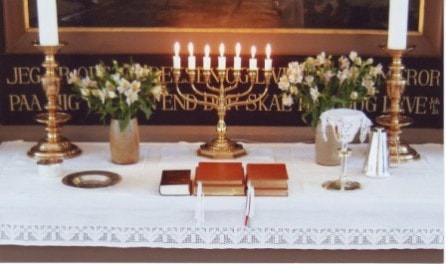 The architect Ahlmann, Århus headed the work, in which was executed by local craftsmen. The church is shaped as a crusiform ground plan with the front built of red bricks.

The church was restored with a new altarpiece and new colours in 2014.

The altarpiece: Opstandelse (“The Resurrection”), painted by Arne Haugen Sørensen 2012.

Altarsilver consists of a chalice, jug and paten made by Bent Exner, Røde Hede in 1974.