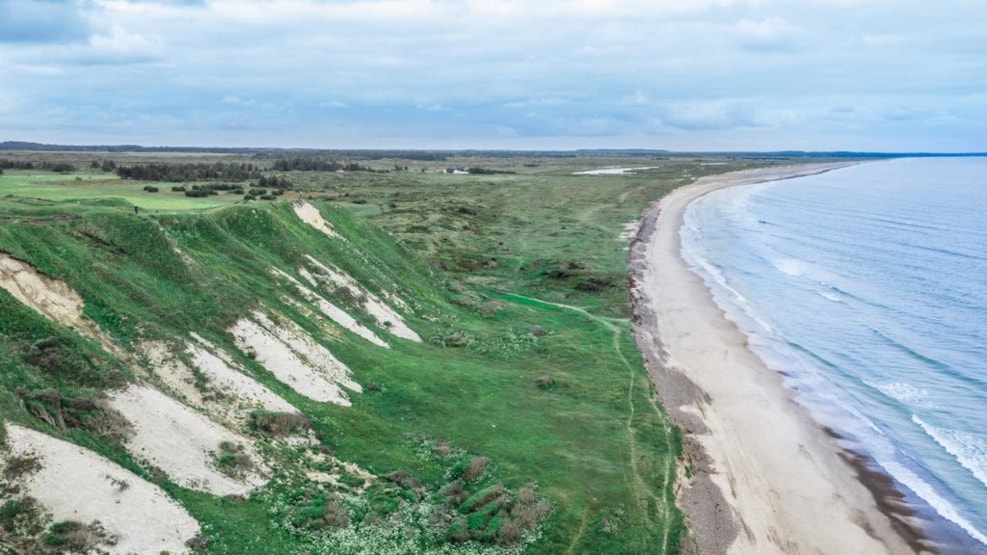 Experience the undulating and beautiful, green landscape at Svinklovene, which forms the northwest corner of Svinkløv Plantage. Enjoy the breathtaking view over the countryside and Jammerbugten. Maybe you can recognize the landscape - this is where the nature footage for the well-known TV series, Badehotellet, is shot.

Svinklovene is a part of the dramatic landscape by Svinkløv Dune Plantation, a 700 hectar large state-owned area, which is open to the general public. The shallow, southern part of the area was up until the Middle Ages an open strait connecting the North Sea to the Limfjord.

The breathtaking scenic view from the top of Svinklovene is not only beautiful, it is also very much historic. Just south of the ranges of hills, there was once an open strait "Sløjen" and a passage leading merchant navies and viking ships back and forth between the Limfjord and the North Sea. The stretch was monitored from the viking castle Aggersborg, and it was functional until at least the 13th century.

The area that surrounds Svinkløv Dune Plantation was originally the north-western part of a large island in the Stone Age Sea.

Svinkløv Dune Plantation is more than 100 years old. It is as a very diverse conifer plantation providing good cover and hence fine living conditions for animals, birds and insects. Roe deer is quite common, and for the patient there are good possibilities to see red deer.

The entire flat area, with its small lakes, was actually one big ocean during the Stone Age - situated more than 50 metres below the level of where you see the plantation today. Back then, the water level was six metres higher than that of today. Svinkløv Dune Plantation has been appointed internationally worthy of preservation - an EU habitat.