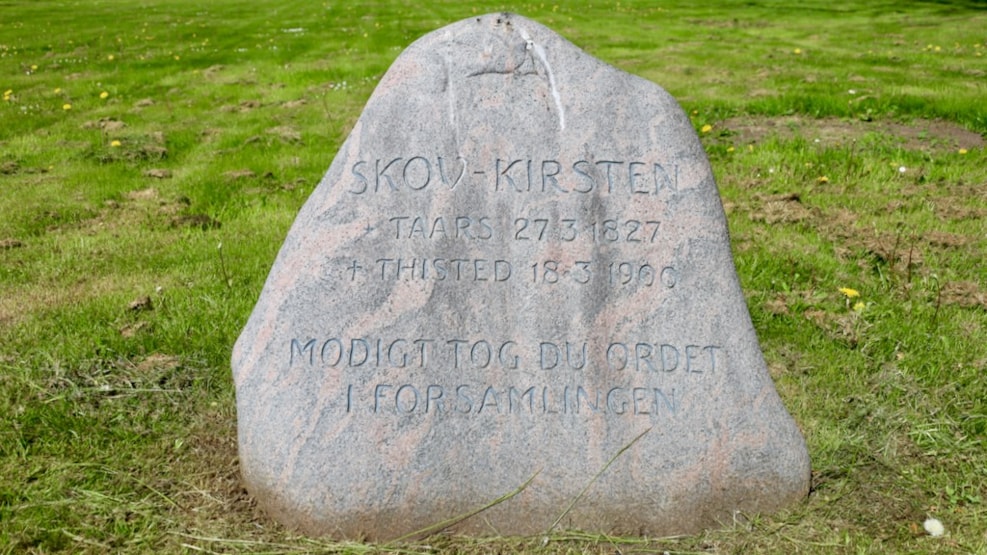 Her grave is found at Søndre Cemetery in Thisted.

Excerpt from article in Thisted Posten by Svend Sørensen:

At the age of fourteen, she was injured with one arm during tobogganing. Her arm became stiff at the elbow and she could no longer take part in the most strenuous work. Instead, she learned to weave from her sister. The sedentary work gave her ample opportunity to ponder life.

It was at that time that Mormon preachers went through Vendsyssel. They preached on baptism and the punishment of God. The last days were near, and people were urged to emigrate to the United States, where Joseph Smith had had a revelation.

The preachers also sought to convince Kirsten that Mormon doctrine was the only right one. But their rejection of infant baptism frightened her. She sought advice from her old teacher, who advised her to stay in the child faith. After this crisis, she came to clarity in her relationship with God.

Skov-Kirsten's work as a preacher began one evening in 1851, when she was asked to visit the neighboring farm because her husband was dying. To her surprise, she not only met the family, but many neighbors were present in the living room where the sick man lay. She had never spoken in front of a large assembly, and only when the light was turned off did she allow herself to be persuaded to say something. A little fumbling she began, but soon it became clear to people that she was in possession of an unusual power.

After this Sunday evening, the rumor of the unusual girl spread, and there have since been bids for her from many places. A highlight was when Grundtvig introduced her to the widowed Queen Caroline Amalie with the words: "Indeed, this little girl has certainly done what she has managed to advance the kingdom of God."