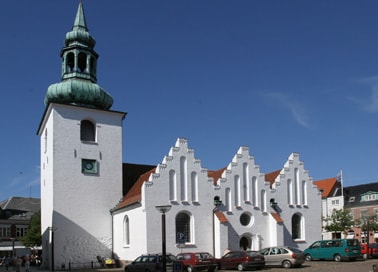 The Church of Lemvig

Romanesque church was built of rough granite stone during th years 1200 to 1250. Stones in the base of the church and in the font - with carved rope ornament - date back to this time.

During the years 1300 to 1500 the church was rebuilt - probably several south transepts were added. The tower dates back to about 1475.

Inscriptions on the bells of the church tell about damages caused by lightning in 1683, and about a town -fire in 1684 after which the tower got a new spire, but 9,5 m lower. The tower was rebuilt in 1788, and at that time ( presumably ) it got a pitched roof.

During the years 1933-35 the church was rebulit and in 1970 the church was restored, and the equipment was repainted and regilded. In 1977 the alterpiece and the pulpit got new pictures, painted by Bodil Kaalund.