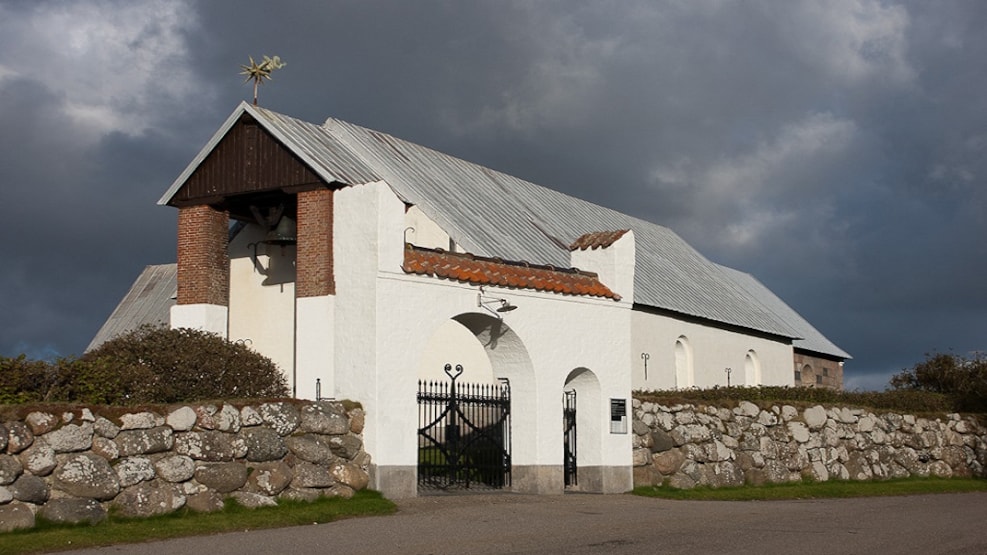 Jannerup Church in Thy is a village church without a village. The church is located approximately in the middle of the parish on a ridge.

The church is Romanesque with later alterations.

It is not known exactly when the porch was built. It replaces a porch from 1681. The lead roof was renewed in 1997.

The porch is unusual with two entrances: one to the east and one to the west. A bell house was built in 1662, but as early as 1707 a new one had to be built.

The current bell was cast in 1937 by Jysk Jernstøberi, Brønderslev.

The altarpiece was made by Peder Jensen Kolding.

The church's original Romanesque altarpiece is walled in the plinth on the south side of the nave. It is very unusual because of two saints' tombs. The church was originally consecrated to St. Andreas,

The second saint's tomb may have contained relics from Skt. Thøger, mentioned in connection with Jannerup church. The church was formerly called St. Anderses Church (St. Andreas) and is to be an extended chapel by a famous spring. People from all over the country sought the source, and it brought great riches to the church.

The choir arch is pointed. The rich furnishings of the Church testify to the prosperity of former times.

The ceiling has had a board cladding on the underside of the beams. The board cladding was decorated with 44 oval fields, painted by Bjørn Holgersen in 1734.

The confessional was made by Søren Pedersen, Horsens, in 1688. It was staffed by Christen Sørensen Maler, Holstebro, in 1690. Søren Pedersen made a similar confessional in Hundborg church - in addition to the dean's chair and altarpiece in the same church.

Like the confessional, the dean's chair was made by Søren Pedersen, Horsens in 1693.

The baptismal font is a fine version of the thybo type: Basin with profiles at the top and sepals at the bottom. The foot has the characteristic corners with buds. On the north wall of the choir hang two older baptismal vessels.

The pulpit was made by an unknown artist around 1640.

The sound heaven from 1675 is in a different style than the pulpit and the church's other furniture. It was originally made for Tvis monastery. Therefore, the coats of arms do not belong in the area. Tvis monastery burned before the sky was hung up, which is why it was sold to Jannerup church. Along with the sound sky, they also bought a sky for the baptismal font. It is believed that the figure showing the baptism of Jesus comes from this baptismal heaven.

The ship was purchased by the parish council in 1988.

Near the church there is a spring that was considered sacred and healing. The source may have been used as a healing source long before Christian times. Skt. Thøger took up the tradition in the 11th century, and it lasted well into the time and became the cause of the church's extraordinary prosperity.

The sacred spring at the church was very famous and was sought after by many people who often came from far and wide. In gratitude for healing, an amount was put into the money block. Over the years, these were very large sums that made the church extremely wealthy. In 1743, the bishop's residence in Aalborg was so included that a thorough renovation was needed. The foundation itself did not have the funds for it, which is why they took out a loan in Jannerup Church.