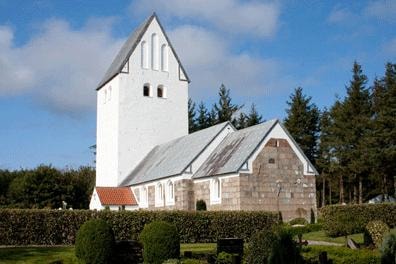 The village church is Romanesque with nave and chancel from around 1200 and has an unusually high tower of monk stones from the 16th century, which can be seen from a very long distance over the low meadow areas south of Hjardemål.

Hjardemål Church has an unusually high tower of monk stones from the 16th century. The tower previously served as a beacon, but can no longer be seen from the sea after the plantations have grown up.

The altarpiece is from 1837 and its pictures are painted by the poet B.S. Ingemann's wife Lucie Ingemann.

The porch on the south side of the church was built in the 19th century.

The church is open all year from morning ring to evening ring.