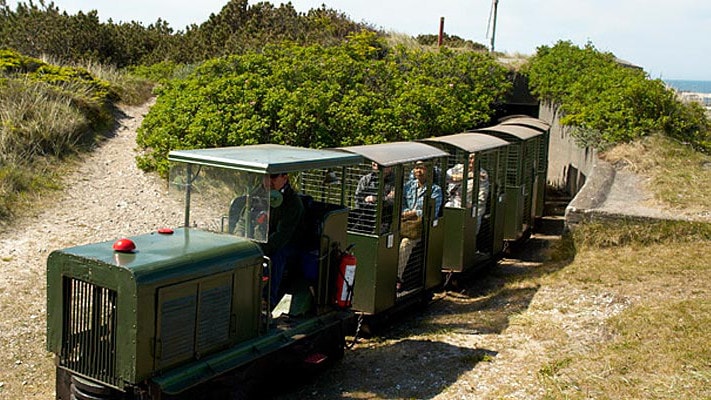 The Ammunition Track at Bunkermuseum Hanstholm

In the countryside which surrounds MuseumsCenter Hanstholm a part of the old munition track has been reestablished.

In the countryside which surrounds MuseumsCenter Hanstholm a part of the old munition track has been reestablished. With the munition train you can take a ride through the battery and pass one of the large munition bunkers and one of the bunkers, which housed a 38 cm gun. The trip will last for about 10 minutes.

The old munitions train runs every day from 30th of April to the end of August and in week 42 (the Danish "school holiday"), or by arrangement.

The munition railway was constructed because the ammunition used in the 38 cm guns was too heavy to be simply carted around on a handcart. Consequently, a system of narrow tracks was set up inside the battery area. Shells and charges were transported by small diesel locomotives to the four gun emplacements from six large ammunition bunkers, which were placed a bit back in the battery area.