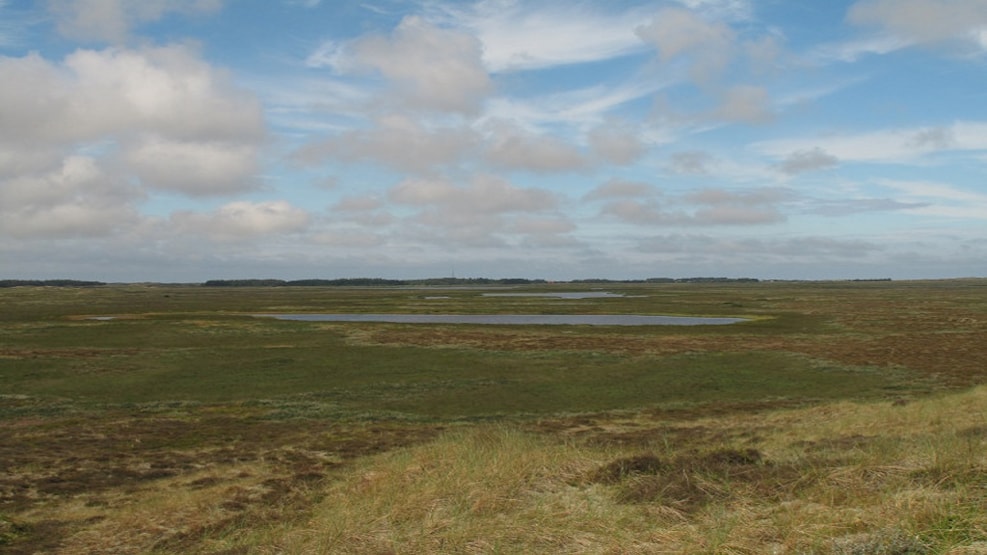 Ålvand Dune Heath is a magnificent and untouched area with markedly and easily recognisable parable sand dunes. From the most easterly dune-tops towards Tvorup dune plantation, there is a clear view to the sea, only interrupted by the Kystvejen road.

In Ålvand, there are several types of natural habitat, which, either because of their vastness or their high quality of nature, are of international significance. This is because they are large continuous dune areas in their natural state, which means they are undisturbed, have natural water levels and have a well-developed and varied vegetation and bird life. A significant part of the national park’s dune heaths, dune hollows and nutrient-poor lakes emerge this way. Several of the shallow, nutrient-poor lakes are lobelia lakes, named after the rare plant; water lobelialow. Other important habitat types include the grey dunes.

Ålvand is home to rare plants like the bog orchid (Hammarbya paludosa), dark green and yellowish green quillwort, pillwort, creeping spearwort and bog hair-grass. The area is especially of great value to birds like the wood sandpiper, crane and several species of geese. For instance, 8-12,000 migrating pink-footed geese will rest here in the spring. Ålvand Dune Heath is also known for its otters as well as natterjacks, moor frogs and sand lizards.

Unfortunately, the nutrient load in the vulnerable habitat types has become a problem. Excrement from the thousands of geese that occasionally occupy the area have led to a significant addition in nutrients, especially in the lobelia lakes and sand hollows, which has resulted in an increase in overgrowth as well as mud deposits in the shallow lakes.

In recent years there has been an increase in the population of red deer, which often can be seen on the open plains of Ålvand Dune Heath and the nearby plantations. During the mating season, it is especially impressive to see and hear the deer, as they fight for the favours of the hinds. During this time, the deer will often be completely black because they roll around in the mud holes; the so-called wallows.

In 2012, a bird hide was erected in the southern part of Tvorup Dune Plantation with access on foot or by bicycle through the plantation. From here, there is a good view of Ålvand, and you might even get close to cranes and red deer with a good pair of binoculars.

Because of the rare breeding birds - amongst others the wood sandpiper, golden plover and crane - there is no access to Ålvand Dune Heath or to Færgegårds Sig from 1 April to 15 July. No-entry signs are posted in the area.